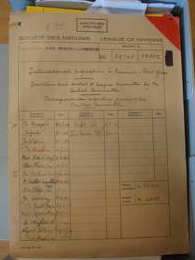 The League of Nations was conceived in 1919 during the aftermath of the tragedies and suffering caused by World War I. The victorious states responded to the catastrophe with the establishment of an organization designed "to promote international cooperation and to achieve peace and security” based on open, just and honorable relations between nations. The Covenant of the League of Nations, which constitutes the first part of the Treaty of Versailles, established the mandates of the world’s first intergovernmental organization dedicated to peace, causing a fundamental change towards an “institutionalization” of international relations.

During the 1920s, the League of Nations enjoyed some remarkable successes by resolving disputes between Member States and increasing economic and technical cooperation. In the field of humanitarian assistance, the League had particular success in aiding the return of prisoners of war and providing a legal framework for refugees which allowed them to start rebuilding their lives.

The increasing economic strife and militant nationalism which characterized the 1930s led not only to the breakup of cooperation between States but also to conflicts which could not be resolved. The League of Nations was unable to prevent these conflicts from erupting into the Second World War and thus became obsolete, which finally led to its dissolution in 1946. The archives of the League of Nations are a testimony to the will of the League’s Member States to create the world’s first intergovernmental organization for peace and cooperation.  These unique archives include documents received or produced by the League Secretariat and organized by a central Registry, Commission files which are records of external League organs concerning for example the Financial Reconstruction of Austria and Hungary, and the Refugees Mixed Archives Group (“Nansen Fonds”). This group contains documents from the Geneva headquarters and external offices concerning humanitarian relief, logistics, employment and financial assistance, petitions and legal protection. The collection of Conventions, Ratifications and Other Diplomatic Instruments includes documents of important legal value with signatures of heads of states and official seals. In spite of its political failure, the legacy of the League of Nations is clearly evidenced in the structure and functions of the United Nations, whose specialized agencies are largely founded on the work initiated by the League of Nations. As such, the position of the organization as a groundbreaking attempt to create international peace and cooperation cannot be disputed and its contribution continues to be recognized by the many researchers and scholars who consult the archives to this day.
LIST