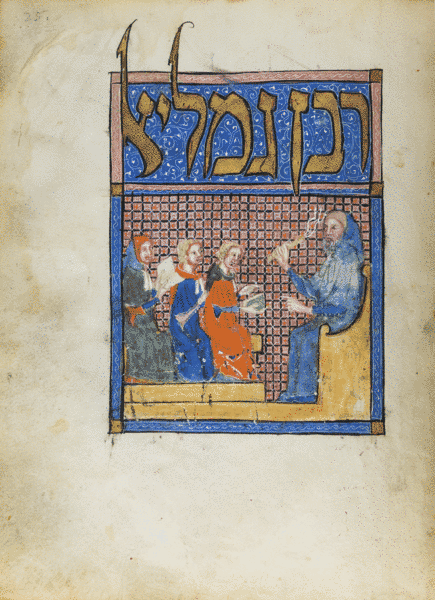 The Sarajevo Haggadah represents an exquisite example of the medieval Hebrew illuminated and decorative art. It is a manuscript written on parchment, with a series of superb illuminations. The Sarajevo Haggadah belongs to the most famous and most beautiful Hebrew illuminated manuscripts from the Middle Ages in the world. Haggadah in Hebrew means a story, a narrative, and this Haggadah comes into the category of so-called Haggadot shel Pesah – the Passover Haggadahs that are read on the occasion of the Jewish feast of Passover. The Sarajevo Haggadah consists of part with illuminations and part with text. Illuminated part contains 69 miniatures on 34 folios (on the inner side of folios, outer side is blank). Illuminations represent certain narrative portions of the Pentateuch (the seven days of the Creation, the story of Cain and Abel, the story of Lot, the sacrifice of Isaac, the Exodus, the miracle of the Red Sea, Moses’ Blessing etc.) with the main focus on the story of Joseph.

The part that contains text is written in Hebrew letters, Sephardic writing, neatly done and fully punctuated. This part has 50 folios, with a collection of lyrical works from the Golden Age of Jewish-Arab culture (10th-13th centuries), prayers for the Passover feast, and instructions for the supplements for the evening prayer on the Passover eve. We propose the Sarajevo Haggadah to be nominated for the International Memory of the World Register, because we deeply believe that the manuscript deserves it by its historical value, artistic values and its global influence. And that is because the Sarajevo Haggadah has a journey and story unlike that of any other book. Not only is it one of the first, if not the only, illuminated Jewish manuscript, it has also survived a range of trials and tribulations over the centuries. The manuscript evokes of the times when Christians, Jews and Muslims lived together in the medieval Spain, testifies on expulsion of Jews from Spain, and also shows again the possibility of coexistence of Christians, Jews and Muslims in modern times, here in Bosnia and Herzegovina what is very important for Bosnian and Herzegovinian people.

The Sarajevo Haggadah represents not only a significant item of Bosnian-Herzegovinian cultural heritage and tradition, but also belongs to the treasures of the world heritage. One of the things that makes this particular Haggadah so unique is that it is richly illustrated, which was against Jewish beliefs of the time. Also, the fact that it survived at all is no small miracle. It is known that the Haggadah went from Spain to Venice, and then to Vienna before landing in Sarajevo. Twice, it was rescued by Muslim librarians (once during the World War II and again during four years of war in Bosnia and Herzegovina in 1990s).

The former director of the National Museum of B&H, who saved the manuscript in 1990s, has explained why the manuscript matters for Bosnia and Herzegovina: "The Haggadah came to Sarajevo for a reason. It was here to test us, to see if there were people who could see that what united us was more than what divides us. That to be a human being matters more than to be a Jew or a Muslim, Catholic or Orthodox. The Jewish heritage was as important to us as any other because it’s what made Bosnia and Herzegovina the rich cultural mix that some people wanted to destroy. The Sarajevo Haggadah was a symbol of that."
LIST