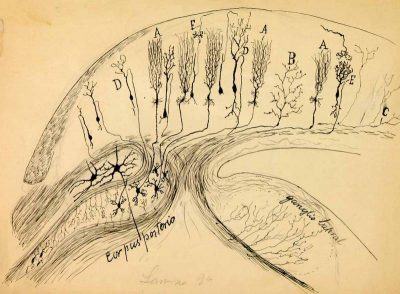 The archives of Santiago RAMÓN Y CAJAL and the SPANISH NEUROHISTOLOGICAL SCHOOL consist of a unique collection of scientific manuscripts, histological preparations (mainly of the nervous tissue), drawings (scientific and artistic), paintings (anatomical and artistic), photographs (scientific, artistic and portraits; mainly in black and white and some in color), correspondence (letters from and to several national and international scientists, as well as politics, writers, artists, etc.), books (both his publications and books from his library, with his own annotations and comments) and prizes and awards (including the Nobel Prize awarded to Cajal in 1906). These huge archives are essential to study the history of the more important discoveries and theories that conduct to the present comprehension of the human brain in its double aspect, anatomical composition (individual cells) and physiological properties (formation of circuits and nerve impulse propagation).

Santiago RAMÓN Y CAJAL (1852-1934) was a Spanish scientist that studied Medicine in the University of Zaragoza and taught as a full professor of Anatomy, Histology and Pathology in the Universities of Valencia (1883-1887), Barcelona (1888-1991) and Madrid (1892-1922). But the most prominent labour that Ramón y Cajal did was his research on the Nervous System with the capital discovery of the individuality of the nerve cells and their inter-relationship to propagate the nerve impulses, the so-called `neuron theory´. Among the direct pupils of Santiago Ramón y Cajal, the most prominent were his own brother Pedro Ramón y Cajal (1854-1950), Pío del Río-Hortega (1882-1945), Fernando de Castro (1896-1967) and Rafael Lorente de Nó (1902-1990). The relevance of the discoveries of his School, that came to complement, confirm and extend the scientific performance of Cajal, as well as the original works, documents, drawings, etc., convert these archives in a unique treasure for current Neuroscience and the History of Science, in general.
LIST